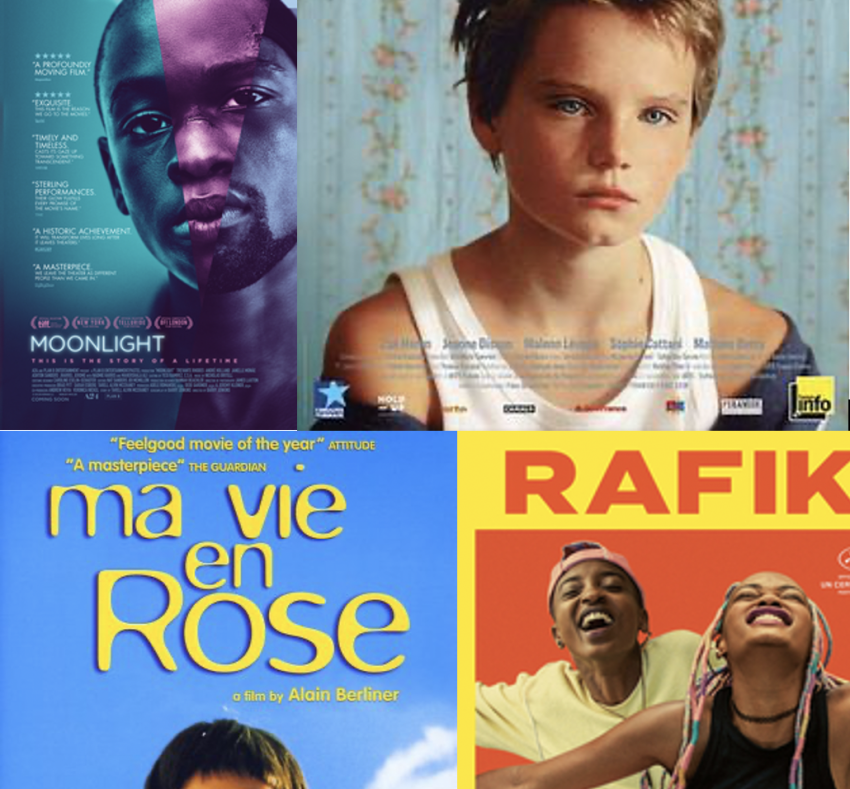 If your pandemic winter is dragging on, and there’s nothing new on Netflix, consider using some viewing time to learn about the experiences and perspectives of LQBTQIA+ children and teens.  Catalina Schliebener, an artist and trainer on the Institute’s Gender, Sexuality and the Family in Early Childhood team, put together this watchlist for you. Note that these are films for adults about the experiences of youth – not films to be watched with children.

As you watch these films consider:

Beautiful Thing (1996) Jamie is a shy teenager, often bullied at school. His neighbour Ste has a rough time at home, being beaten by his father and brother. This issues bring them together and they find that what they feel for each other is more than friendship.

My Life in Pink (1997) Ma Vie en Rose follows a boy’s exploration of his gender identity with warmth and empathy – for its young protagonist as well as the family affected by his journey.

Tomboy(2011): Posing as a boy with the kids in her new community, ten-year-old Laure enjoys playing about as a boy, despite the challenges this sometimes presents.

Rafiki (2018) Kena and Ziki live very different lives in Nairobi. Kena works in her father’s shop and awaits the start of nursing school, while Ziki passes the days hanging out with her friends and making up dance routines. Their paths cross when their fathers run against each other for seats in the County Assembly, and they find themselves drawn to each other. Soon their interest grows to affection and the girls find ways to love each other despite the ever-watching gaze of the neighborhood.

We the Animals (2018) Manny, Joel, and Jonah tear their way through childhood. Their mother and father have a volatile relationship that makes and unmakes the family many times over, often leaving the boys fending for themselves. As their parents rip at one another, Manny and Joel harden and grow into versions of their father. With the triumvirate fractured, Jonah, who is the youngest, becomes increasingly aware of his desperate need to escape.

Pariah (2011) Teenage Alike (Adepero Oduye) lives in Brooklyn’s Fort Greene neighborhood with her parents (Charles Parnell, Kim Wayans) and younger sister (Sahra Mellesse). A lesbian, Alike quietly embraces her identity and is looking for her first lover, but she wonders how much she can truly confide in her family, especially with her parents’ marriage already strained.

Moonlight (2016) A look at three defining chapters in the life of Chiron, a young black man growing up in Miami. His epic journey to manhood is guided by the kindness, support and love of the community that helps raise him.

Helen Frazier is the Institute’s Director of Early Childhood.