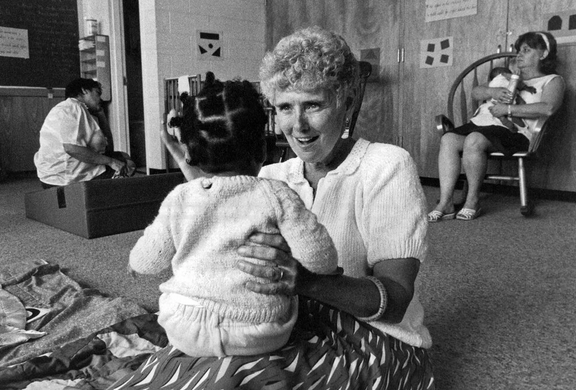 We are sharing the obituary of Sister Elaine Roulet, a Roman Catholic nun who made a difference in the lives of women and children over the years. Sister Elaine helped female inmates bond with their children and created programs for mothers both in prison and after release. Read the article written by John Leland from the New York Times below to learn more about her activism, her advocacy, and her influence and success.

Sister Elaine Roulet, a Roman Catholic nun who helped female inmates bond with their children and created innovative programs for mothers both in prison and after release, died on Aug. 13 at the Stella Maris Convent in the Rockaway Park section of Queens. She was 89. The cause was heart failure, said Scott Stepp, director of development at Providence House, a nonprofit organization based in Brooklyn that she helped start.

Sister Elaine followed the simplest of ideas: that female inmates, most of whom are mothers, should have regular time with their children and receive parenting lessons to prevent their family wounds from passing to the next generation.

At the Bedford Hills Correctional Facility, a maximum-security prison for women in Westchester County, N.Y., Sister Elaine helped create the Children’s Center, a room filled with toys where mothers could play with their children instead of speaking stiffly across a table or through glass. She also revitalized the nursery to allow babies to live with their mothers for their first 12 or 18 months. The program has been replicated in prisons around the country.

“She wanted to do some pretty unusual things, and I was lucky to be the right person at the right time,” Elaine Lord, the former superintendent at Bedford Hills, said in a phone interview. “We were like the Thelma and Louise of the prison system. “She wanted to make it more humane, and I went along with that because I wanted to make it more humane,” Ms. Lord continued. “I let her get away with those things because I trusted there was a good reason.”

She also started a home for children whose mothers were incarcerated and built a network of 10 Providence Houses, which provide housing and support to women who might otherwise be in prison or homeless. In 2005, she started Our Journey, a monthly retreat for formerly incarcerated women. She was inducted into the National Women’s Hall of Fame in 1993.

In all of her work, she relied on the wisdom of the people she served to design programs to meet their needs — another innovation in prison thinking, said Sister Teresa Fitzgerald, the executive director of Hour Children, an offshoot of Sister Elaine’s work based in Long Island City, N.Y., that serves mothers and their children in and after prison. “When you went in there, there was no doubt who was running things,” Sister Teresa said. “She’d say, ‘It’s the women in green.”

Elaine Margaret Roulet was born on Oct. 5, 1930, in the Maspeth neighborhood of Queens. She was the second of two children of Margaret (Laundrigan) and George Roulet. Her father died when she was a child, and her mother worked in the Brooklyn Navy Yard.

She professed her first vows in 1949 and took her final vows as a Sister of St. Joseph, Brentwood, on Long Island, in 1952. She spent the 1950s and ’60s as a parochial school teacher and principal in Brooklyn and Queens. But her strongest calling was to work with poor people, which led inevitably to the prisons, said Sister Mary Ross, who worked with her at one of the first Providence Houses.

With a master’s degree in counseling from Bank Street College of Education in Manhattan, she started at Bedford Hills in 1970 as a family liaison and quickly saw a need to expand both the nursery and the visiting center. Her emphasis on teaching parenting skills, often to women with no maternal role models, transformed lives for generations, said JoAnne Page, the president of the Fortune Society, an organization that supports people after prison. “The idea that a baby will have a chance to start with a mother who’s learning to be a parent — I can’t put into words how much impact that has,” Ms. Page said. “That creates a whole different ripple effect.”

Sister Elaine lived simply in Brentwood and later Breezy Point, in Queens — rising at 4 a.m., praying until 5, then attending Mass and swimming before taking the long drive to the prison to spend the day behind bars. She likened her convent room to a prison cell, and she bought all of her clothing from thrift stores, managing always to match exquisitely. “All you had to say was, ‘Elaine, I like those earrings,’ and in two seconds they’d be in your hands,” Sister Mary said.

The actor Glenn Close, who witnessed Sister Elaine’s work at Bedford Hills and became a lifelong friend, said she once wanted to give Sister Elaine some shoes and asked her size. “She said, ‘Anywhere from 6 to 9,’” Ms. Close said in a phone interview. “She always had a smile and a laugh, but underneath she was a deeply serious woman, ministering to women who are forgotten.”

Women said they could tell her anything — even that they wanted to reunite with their abusers — without fear of judgment. And she never asked women how they had ended up in prison.

Children magically behaved for her, said Blanche Wright, who gave birth to a son at Bedford Hills in 1980 — “in shackles,” she said — and who later helped start the Our Journey retreats. “We were amazed at how well behaved our children were with her,” Ms. Wright said, “because as soon as they got in the visiting room with us, it was the Wild West.”

Ms. Wright said that the family of her son’s father initially kept her son away, but that Sister Elaine persuaded them to allow weekend visits. “It made all the difference in my life,” she said. “He just turned 40, and I don’t think we’d have a true relationship now without those visits.”

Sister Elaine developed dementia in her later years and moved to the Stella Maris convent, where younger nuns cared for her. But she maintained the sense of humor that colleagues said was one of her most effective tools.

“I’m convinced that laughter is God’s favorite earthsound,” she said in a 1995 interview for an oral history of her order, “and I’m so convinced that if we could use humor, it would really evaporate so many problems.”