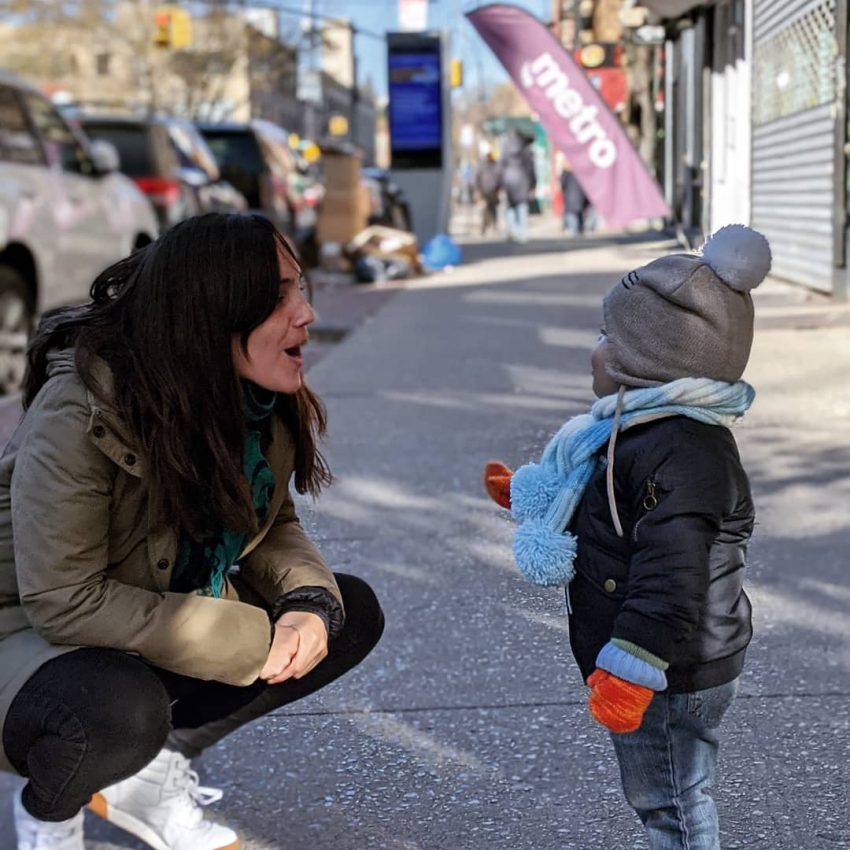 One of the goals of the TLC blog at the Institute is to share a variety of perspectives on teaching, leading, and caring as we all adapt to new and different circumstances. In recognition of the learning that is happening through everyday interactions in loving families, we invited one of our Screening and Assessment Specialists, Tatiana Bacigalupe, to share her reflections on raising a bilingual son.

I am a preschool teacher and I have been in places where I have to teach another language to young children, where young children speak a different language than the teachers, and in places where I helped as a translator for the school community. English is not my first language, and it was a hard and painful process to learn it as an adult. I struggled with grammar, I still do, and it took me years to feel comfortable speaking in public. Recently, my work has shifted from being a preschool teacher to being a teacher educator, and in this journey my “lengua madre” (my first language), has helped me to reach out to more educators who feel connected with Spanish.

Two and a half years ago, I became a mom, and the fact that I was raising my child in another country with a different language was always in the back of my head. I still remember when after two months of preschool, my son looked at me and said “more milk”. I could not believe what he was saying, I felt proud of him, but I was also worried he was not going to speak in Spanish anymore. He was only two, and he just started to increase his vocabulary. That was only the beginning of a list of uncountable words he was learning everyday. I was seeing how he was responding to people on the street when they asked him some questions in English. Somehow he was navigating a new world, and he was so happy in it. However, I felt stressed, worried, and even questioned myself of choosing a preschool where our language was not spoken. What was I missing? Why was I so worried? What I was giving up letting him navigate this new world?

Since he was born, I only spoke to him in Spanish but the curiosity of knowing how much he was learning at school, encouraged me to try a few interactions in English. I needed to understand what was going on, I guess I needed to wear “my teacher hat”. I was not the only one trying, my family and friends encouraged him to speak in English, too. They also wanted to know how much he was learning and to be honest, it was impressive: he was saying numbers, letters, colors, animals, and so much more. Again, the anxiety that he will somehow forget the Spanish and prefer to speak English was there. I was kind of obsessed with making him talk to me only in Spanish, without realizing how much joy it brings to him to say the words he learned at school. I was definitely not making his bilingual process easy. After months of being worried, I realized that I was the only one not enjoying the journey. His teachers were excited to see him speak English and then Spanish with us, and my family was so proud of seeing how easy it was for him to learn English. We made a compromise, or at least I made one. I was going to respect his process of learning a new language, and I was also going to make sure he felt proud of learning new words. My goal was to help him, and myself, to understand that Spanish and English can coexist.

I set my mind to send him the message that there were multiple languages and that “things” can be called in different ways. I ask questions such as “Como se dice eso en Inglés o Español?” (How do you say that in English or Spanish?). I also make him choose what language he wants his books to be read, or what language he wants to play the animal game. I also translated some songs from school and we sang both. We both understood the importance of coexisting. I began to notice that he was able to identify who in his life spoke English, who spoke both, and he initiated conversations in both languages, depending on who he was speaking with. He even called me “mommy” when we were around my friends who only spoke English!!! It was not me teaching him how to switch from one language to the other one, instead it was him showing me what he was capable of doing that.

Throughout this process, I understood it was not about choosing Spanish or English as a preference, it was about the privilege of knowing both languages to communicate with more people. The last two months, he has been exposed to more Spanish than English, because we are home and living in a context where schools and outside activities are closed. In my house we primarily speak in Spanish, but we still have interactions in English with friends and co-workers. My husband and some friends actually asked me if I was worried that Santiago would forget the English he learned at school. And my answer is No. It is not about forgetting one language, but rather giving one language more value over the other one, and I am certain we are trying to not do that. What matters now is that he continues to learn “the essence” of knowing multiple languages. I want to encourage him to know that objects can be called in different ways, that we can use words in different languages, depending on the context, the people, or even his desires. I am positive Santiago has not forgotten that, he still enjoys his virtual morning meeting in English with his teachers. He enjoys books in English, and games as well, and he can express his ideas with people that speak to him in English. He speaks with my family in Spanish but he also enjoys teaching them the colors in English. We are building a strong foundation for him to understand that speaking multiple languages is a privilege we have to honor. We do not need to choose one over the other one, we would incorporate them both as a skill that would help us to communicate in different ways.

Tatiana Bacigalupe is a Screening and Assessment Specialist at the Institute and a former preschool teacher.

2 thoughts on “My Bilingual Child”