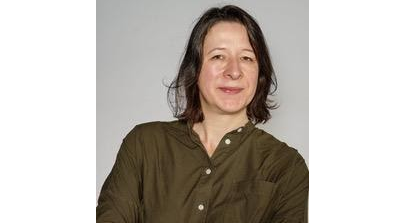 The Leadership Initiative invited its members to reflect on different aspects of leadership, bringing to light unique pathways, approaches, challenges and lessons learned. TLC hopes that through this series you get to know these diverse individuals and take away an appreciation for their journeys and leadership skills and its impact on the lives of children, families, their staff and communities.

Kasia Kaim-Goncalves is the Director/Owner of Greenpoint Garden Playhouse in Greenpoint, Brooklyn where she lives with her husband and two children. The Greenpoint Garden Playhouse, which she opened in 2017, is a play-based Family Child Care (FCC) that serves children ages 20 mos. – 4 yrs.  Kasia has a Bachelors degree from City University and recently enrolled in a Masters program for Early Childhood Leadership at the Erikson Institute. Kasia is a member of the Community Education Council for District 14  and has been a member of the Leadership Initiative since 2019.

I met Kasia just over a year ago at a Leadership Initiative Networking Meeting (in the days that we met in person) and soon became her coach.  What follows is a conversation Kasia and I had about her vision for the Greenpoint Garden Playhouse and the genesis of the program.

I know you’ve been working on your vision for your program. Can you tell me about that?

I have just been thinking about what a vision statement would look like for my current program, but also for the program I imagine it to become. And so this is what I came up with. I’m not sure about these things. I’m not sure if it will work out. I just have questions. This vision is definitely a work in progress, and I put it like this, it’s the vision of the program I wish to create.

Well, the vision is to create a program which serves children from different socio-economic and cultural backgrounds in the Greenpoint community. To sustain such a program will require funding from different sources, possibly DOE 3K & Pre K, Headstart, local private funding, and perhaps establishing a business such as a café that is connected to the FCC.

Creating an equitable tuition framework for parents is important to me. This practice of equitable tuition, is intended to support families that wish to send their children to the program without assuming the burden of tuition payments that exceed 7% of their income. In addition to offering accessibility for families, I also wish to focus on paying fair and adequate wages to staff and investing in teacher professional development.

The program would work in collaboration with parents and community members to establish close knit connections with the goal to introduce and promote civic engagement for the children and their families.

So, that’s more or less a short description of what I envision for the future.

What was the impetus for you to develop your program in its current format?

After years of working with children in preschool environments before having my own children, I was really committed to staying at home with my own daughter for as long as I could, but that turned out to be difficult in New York City.  So my solution was to run a little playgroup which my daughter attended as well.

So this has always been a big thing for me because for many educators with young children returning to work basically means earning money that they then spend on childcare. When I had my son I attempted to return to work when he was around one and my daughter was four. And I tried to figure out the solution for childcare for him but it turned out to be impossible.  I took a job, however just after a couple of months I basically quit. It didn’t work out. It doesn’t make sense. I know that it’s difficult to be in a situation where you basically work for childcare.

And, and of course the difficulty for the most part is with the mothers, too, right, because it’s the mothers who then have to quit their jobs and stay home. So definitely that was on my mind when I thought about starting a Family Child Care program.

That transformed into the family childcare program that I currently operate where I serve up to 12 children. It was kind of an organic process where lots of parents knew about it and inquired you know, about the possibility of sending their children in the future.  Knowing that I had community interest, I secured my current space, obtained a license, and began creating the program really from scratch.

And you’ve done a wonderful job with it.

Tell me a little bit more about your interest in providing entry into your program for children whose families would not ordinarily be able to afford the tuition.

The fact that I was unable to offer care to all children really did bother me from the start. And so I decided at some point to allocate two spots for children who receive subsidies. And, you know, this way my program is accessible to people who would otherwise not be able to afford it. But this is just really a beginning, just to get the feel of how these programs can be funded and run sustainably.   I have already offered a spot to a family receiving a subsidy from ACS.  It’s really an experiment for me in accounting. I think I learned a little already and I’m hoping to learn more from this experience.

In our conversations we’ve talked about the process/reflections you went through before you decided to give yourself the title of Director. Can you talk about that process?

I mean, well, first of all, I must thank you for this because I think you know I really do still have a hard time to see myself as such.  And at the same time I feel that’s where I am professionally. I don’t know why it took me several years to call myself a Director.  It’s hard, but I think it’s important for me to assume this role and be aware that I am the leader.

I can get more things accomplished if I have this view of myself.  I have to assume this role because without leadership my vision would not come to fruition. Leadership is a critical ingredient so I started calling myself a Director, even though, you know, it seems strange but I’m learning.  I’m trying to grow into this role, and maybe one day I’ll wake up and I’ll feel like I’m there, but I’m not there yet.  Well, taking it on was, as you said, a big step and I think a very positive one.

Steve Castar is an early childhood coach with the Leadership Initiative.