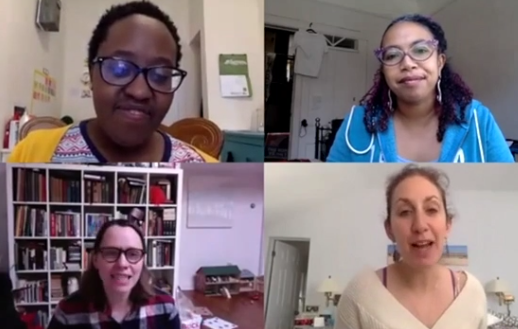 I teach five- and six-year-olds at a progressive independent school on Manhattan’s Upper West Side. We’re a very child-focused school, and think a lot about what’s developmentally appropriate. I really appreciate this approach, which includes giving children ample outdoor time (about an hour a day), unstructured time in the classroom, and lots of hands-on activities, including my favorite, wooden unit blocks. I don’t have any technology for children in my classroom, and we don’t give homework.

And then there was a global pandemic. Suddenly, parents want worksheets (I don’t have any), and I’m actually asking children to be on a screen (usually, I fully support families who have no screen time at all, and I wouldn’t dream of telling them to plop their child in front of a computer). But things are different, and now I’m having Zoom meetings with seventeen five- and six-year-olds, and counting myself lucky that I only have seventeen.

Of course, the children act just as I would expect. They’re five and six; they can’t sit still for very long, and expecting them to all wait their turn to talk when there’s nothing else happening is absurd. In our first meetings, we observed children rolling around on the floor, playing with their backgrounds, putting their faces very close to the camera to see what would happen (Can I see up my own nose? Let’s find out!), doing a variety of what could generously be called yoga poses, wiggling their toes in front of the camera, and, generally, doing all the age-appropriate things I would have predicted they would do when faced with a new, kind of weird way of interacting with the world.

So I allowed myself to feel curious. Why wouldn’t they try to figure out this new thing? How would they know how to act? And it occurred to me: we spend the first six weeks of school teaching children routines, expectations, transitions; in short, how to be in school. We explicitly model and teach how to sit in meeting, how to act during a read aloud, how to transition from lunch to rest. Even though they all come from school environments that have similar expectations, we still spend six weeks reviewing and re-teaching. Lots of teachers do this; there’s even a great book for teachers called, The First Six Weeks of School. And now, it’s the equivalent of September, and I’m confused about why they don’t know how to be in a Zoom meeting? Of course they don’t know; I never taught them! So I realized we needed to teach them. But how? We’re not there, and, obviously, a Zoom meeting where they’re upside down is not the best place to teach them to not be upside down during a Zoom meeting.

My brilliant colleague Anna does a project with her class every year when they make up class rules. They make a book, based on David Shannon’s classic, No, David! called, No 5-6s! She takes pictures of the children doing ridiculous things, and pairs it with text, like, “No, 5-6s, we don’t put the blocks on our heads! We put them on the shelves.” “No, 5-6s, we don’t just start cleaning up someone else’s structure, we ask if they want help!” This gave me an idea. Why didn’t we make a Zoom video of the 5-6s teachers doing all the wrong things? Then the kids could laugh at us, we could tell them what we needed them to know, and, hopefully, we’d be spared the up-the-nose views coming from the Golden Gate Bridge.

I made a list of the Zoom behaviors that were the worst offenders, and talked to my colleagues. They added some of their own, and we each picked one or two. I even got Anna to include her daughter, a former student of mine, in the fun. We talked it through, and did it one take – it’s pretty rough, but also pretty funny. I hear kids laughed when they saw it, and we’ve seen a marked difference in their behavior during our small group Zoom chats. They still sometimes put their toes on the screen during whole group times, but, then again, who hasn’t wondered if anyone else will notice what’s happening in that tiny box on their screen? I know I have.

Lalena Garcia is a trainer at the Institute on gender and sexuality in early childhood settings, as well as a teacher of five- and six-year-olds at Manhattan Country School.